Our primary interest is aiding Christians through financing their own micro-projects that would provide them with income to preserve their dignity and alleviate the calamities of the crisis.

The team at Hope Center reviews and evaluates the projects and the extent to which the applicant has planned for his/her idea. If accepted, the center starts providing funds for the project to initiate.

Besides aiding Christians in need, this initiative aims for reviving the city of Aleppo that has lost most of its economic structure. 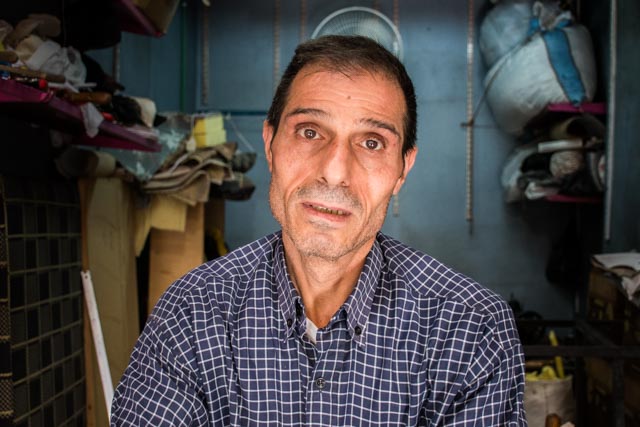 I had a workshop for furniture cushioning in Sheikh Khder before the war, armed forces suddenly entered that area and... 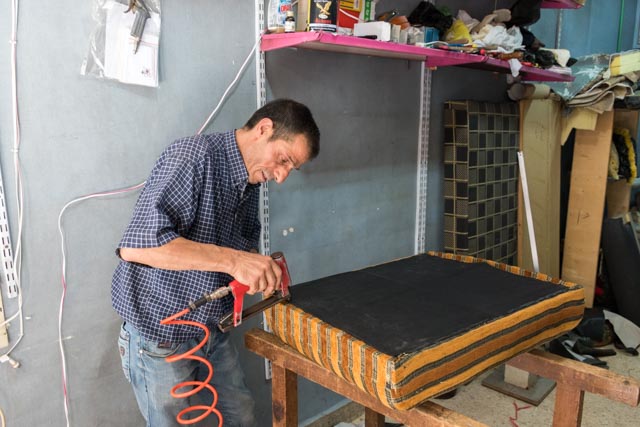 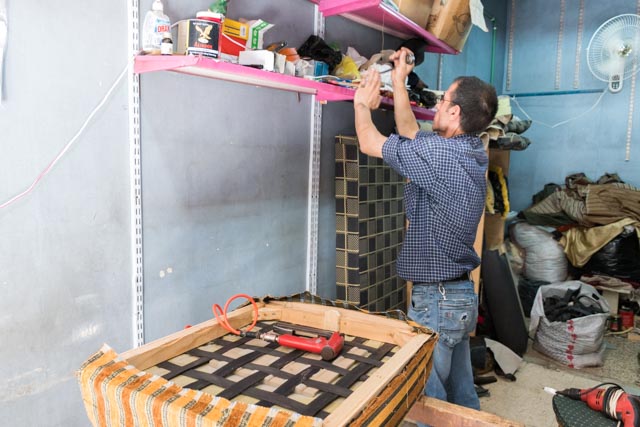 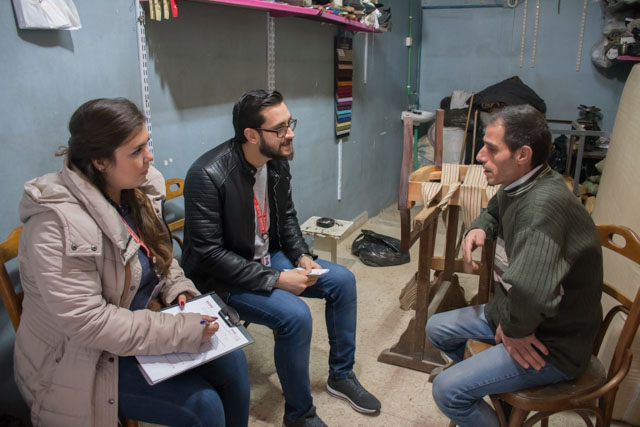 
I had a workshop for furniture cushioning in Sheikh Khder before the war, armed forces suddenly entered that area and I lost my equipment. After that I worked as a carpenter, doorkeeper, and finally in water refilling. One of my customers, when I was working as a carpenter, I met someone that also has a workshop for furniture cushioning and I was given the opportunity to work with him. I stayed in Damascus for two years, the first year my family lived with me in my sister’s house who’s married there. My wife and daughter came back to Aleppo after one year. When I heard the news about Aleppo’s situation getting better, I decided to come back here. I currently receive aid from the church each month. I rented a place and opened a workshop for furniture cushioning. I asked for some financial help from my sister who’s living here in Aleppo, she’s retired, and she is currently fighting cancer. 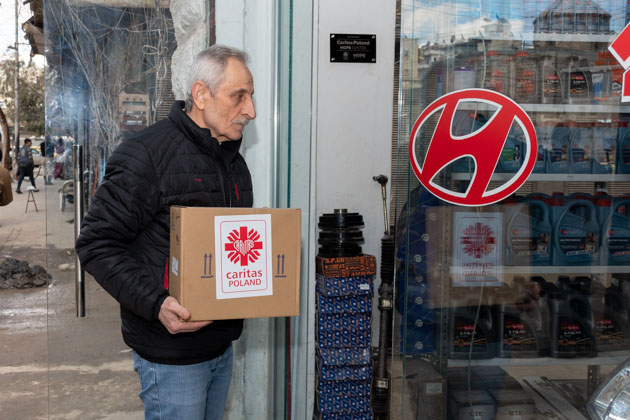 Despite his old age, Garabed Hayitian still has the drive and resilience to open his own shop in a relatively... 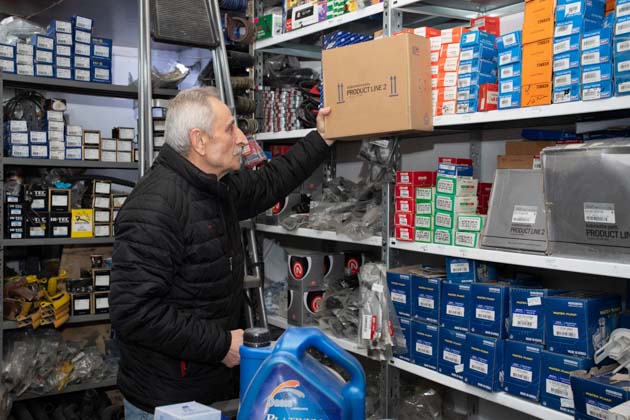 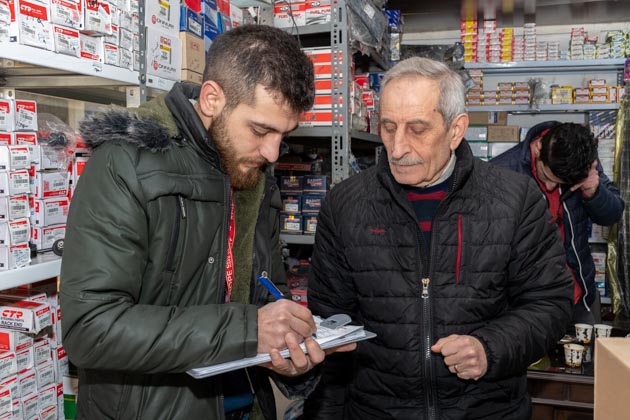 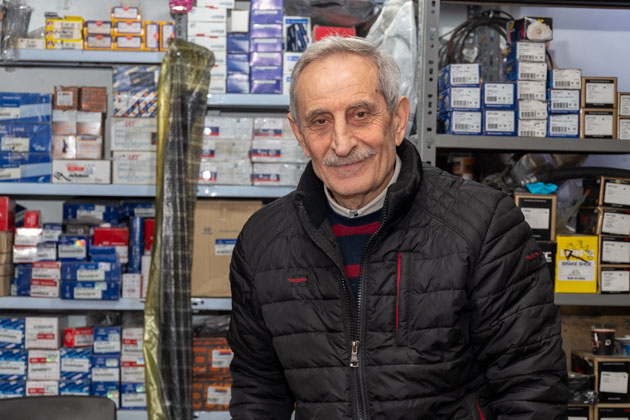 
Despite his old age, Garabed Hayitian still has the drive and resilience to open his own shop in a relatively new field of work for him, all for the best interest of his family.

Garabed is a father of two young men; Sarkis and Hrag, he used to own a workshop in the industrial area of Al-Ramouse. His specialty was repairing and producing the parts of buses, he manually made the molds and the samples; he learnt all about this business when Turkish workshops used to visit Aleppo for bus’s maintenance whenever needed, since it wasn’t available in Aleppo. His language skills and intellect became handy back then, and Garabed became well known for his services cross-country.

In 2012 war reached Aleppo, Al-Ramouse was a vital area in Aleppo regarding the economy, it was targeted first by armed groups. Garabed was at home recovering from a minor medical procedure, when the news hit him, he had lost his workshop and all the equipment and supplies.

The news was devastating specially that he was the sole provider for his family (his son Sarkis was serving in the army and Hrag was still a student). However, the catastrophic loss did not make Garabed give up.

With the help of some friends Garabed started distributing car engine oils for a particular agency in order to make a living. For two years, he held out in that job but the economic instability prevented him from proceeding. At that time another tragedy occurred, Garabed’s brother was injured by a mortar shell that fell near his workshop, couple of months later he passed away affected by that incidents. Garabed himself was injured, his hearing was affected and until this day he still suffers from it.

Long story short, when armed groups withdrew from Al-Midan in 2016 Garabed visited his brother’s workshop, it was robbed off and damaged but during the next couple of years the church helped him in rehabilitation, so that he can use the space to work. Garabed couldn’t go back to his old business since it costs a fortune, but what this resilient man thought of is to embark a new domain, a more practical one; car parts retail. But in order to do that he had to learn everything from scratch. He did not hesitate, he made a partnership with a retailer and they shared the same place (his brother’s), slowly Garabed started cultivating his selling skills.

Garabed was planning to learn about this profession and establish a prosperous business for his son Sarkis, so that he doesn’t have to start from scratch. That’s why he wants to invest in more car part merchandise in large quantities so that he can reap more profits and turn the business wheel smoothly as soon as possible. 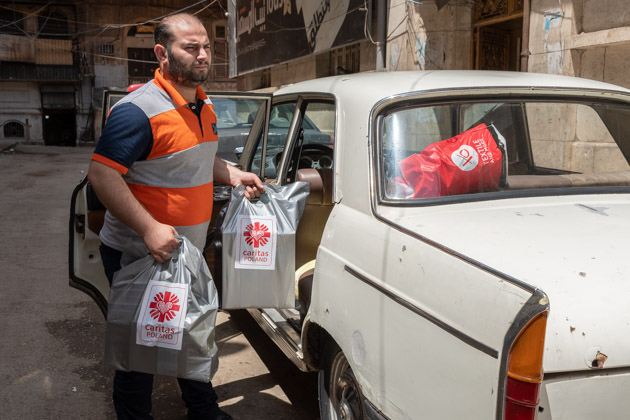 I am aboud, a 24 years old man, married to Miramar Ewaz who is one year younger than me, God... 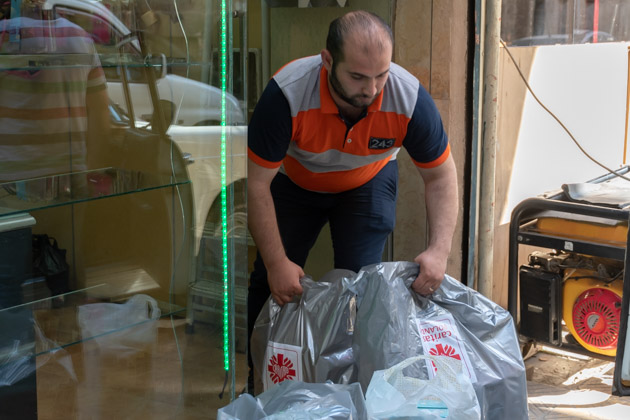 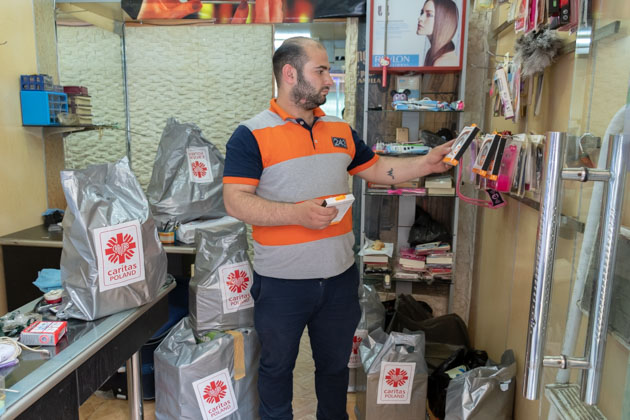 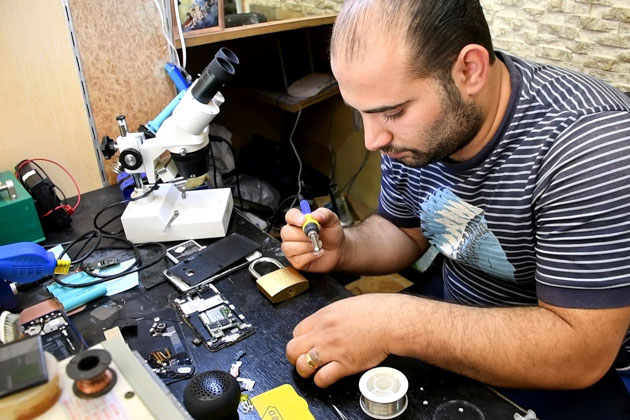 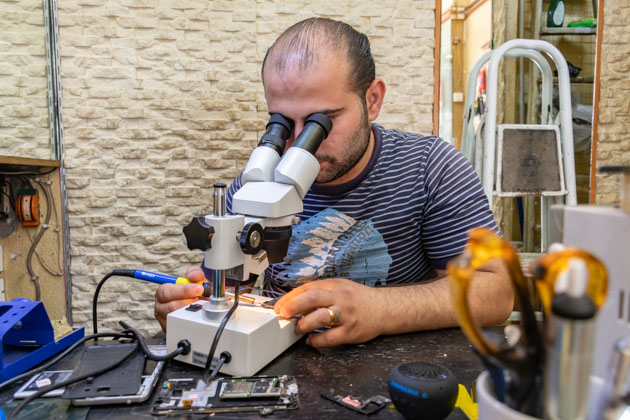 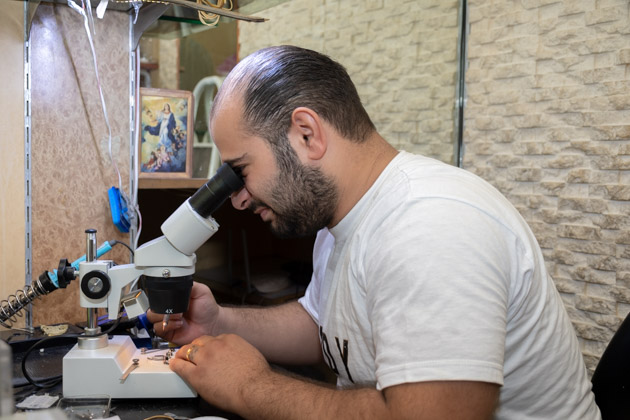 
I am aboud, a 24 years old man, married to Miramar Ewaz who is one year younger than me, God blessed us with one son “Raed” who is only two months old. My story began when I got recruited in the military service in 2013, the war was in its climax, my service location was in khan AL-Asal in the countryside of Aleppo city, there I met a guy who works in fixing mobile phones and I started learning from him during my 3 years of service.

Later, I was moved to another region called Bani-Zed where I was injured badly during one of the clashes, as a result the right side of my body was fully paralyzed, I couldn’t move and I also lost a part of my skull, I was feeling completely disabled. After my injury, I spent a long time in a wheelchair, my fiancé Miramar stayed by my side during the recovery process, she was the reason that gave me hope to cling to life. We got married, and lived in my aunt’s house, who offered her house to us to live in as she traveled to Germany. The only source of income for me currently is from my job in a mobiles’ maintenance shop, but the salary is low and the work hours are too long. I wish to open my own shop to help me become an independent person and to provide a stable income for my growing family.

Nadia, Maria, and their mother Georgette are three strong women struggling together to survive in these difficult times that all...


Nadia, Maria, and their mother Georgette are three strong women struggling together to survive in these difficult times that all Syrians are facing.

The 38-years-old Nadia has always depended on her skills in order to work and provide a living, ever since 1997, she utilized her talents in handwork in manufacturing wax molds for jewelry making, then she entered the beauty domain in 2002, a thing that she loved and had always been passionate about. At first, it started as a hobby for her, but after mastering and enjoying it more and more by time, it became her full-time job and an income source for the family, her sister Maria helped her in the same field.

Nadia never had her own salon, considering the hard-financial situation, she either went to her clients houses or she welcomed them in her own house. Although It was exhausting, but the sisters were managing to make it through day by day until the war happened…

In 2016, just days before the withdrawal of the armed groups from eastern Aleppo, a missile hit Nadia’s building, luckily the damages were minimal, but it was a horrible experience for Nadia and her 72-years-old mother who were in the house. Maria her sister still remembers when Nadia called her on that unfortunate day screaming for help.

The economic crisis during the war had its tall on the family. no matter how much effort they make, it is becoming exhausting to keep up with the increasing costs of the basic livelihood needs of everyday life. Maria took morning shifts in a tailoring workshop, they are both exhausted from the continuous moving between houses, and that is the main reason Nadia wants to open a beauty salon.

It is time for the hardworking sisters to finally settle down in their own place, and the stability that they will have in their salon will reflect on their life and increase the income so they can have a decent life with their mother.

In 2015, Ohannes and his family had to flee from their house in Al-Midan area when a mortar shell hit...


In 2015, Ohannes and his family had to flee from their house in Al-Midan area when a mortar shell hit their building, although the damage was minimal compared to the severity of the incident but the family had to move to the aunt’s house for more than a year.

Ohannes and his brother Rafi who deliver photography services since 16 years, are now struggling due to the high costs of their equipment, the camera they are using is old and started to break down, they need support in maintaining good quality lenses and cameras since this is the most important factor in their type of work.

Rezk Rezk is from a village near Idleb called Al-Jdaideh. It was his hometown and the place where he spent...


Rezk Rezk is from a village near Idleb called Al-Jdaideh. It was his hometown and the place where he spent his life in until in 2012, he was forced to flee the town under threats from the armed groups who took control of the village with the start of the war.

The 41 years old Rezk took his wife Julia and children Simon (14 years old), Emily (12 years old) and Michael (11 years old) and went to Latakia after losing their house, farming land and his supermarket. Rezk didn’t leave alone, his parents and in-laws also became displaced due to war. The three families headed to latakia and at the beginning he stayed with his parent in a rented apartment to decrease the costs for a while before renting his own house. The five years were extremely hard on Rezk. He worked in a supermarket, in retail shops and as a driver.

When in 2018, one of Rezk’s cousins decided to open a clothing workshop in Aleppo city, he offered Rezk a driver job in that workshop knowing that he was in need, he took his family and settled back in Aleppo in a rented apartment in Al-Midan neighborhood. Since then, Rezk has been battling the hardships of life alone, since he is the sole provider for his family of five and his modest salary is not enough anymore considering the economic crisis and its implications on everyday life.

And since driving has been one of the things Rezk worked in before, he applied for the Micro Project Program hoping that he will be able to purchase a taxi car provide a better income for his family.

Having a taxi of his own will impact Rezk’s life immensely, it will be a glimpse of hope for the family that once lost everything.